Skip to main content
January 09, 2018
An interpretation of the opening chapter of my forthcoming novel #TheRedDie, by Mozambican illustrator Isac Zavala. 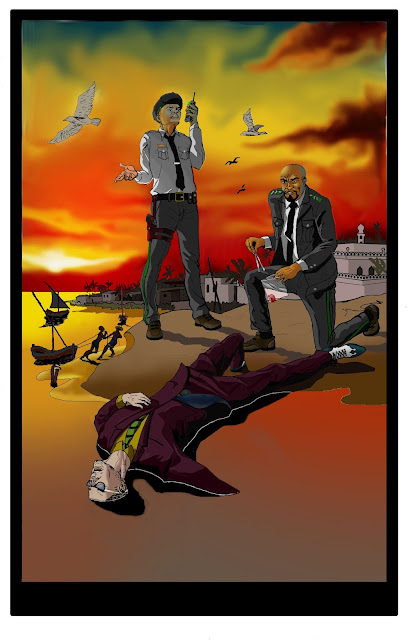 Popular posts from this blog

March 03, 2018
First, second and third prize is a feeling of utter crime fiction satisfaction and smugness.

1) Jo Nesbo is best known as the bestselling crime fiction author of The Snowman. But which award-winning band does the Norwegian crime author also sing lead vocals for?
2)  Maj Sjowall & Per Wahloo are remembered as one of the best couples to have ever written crime fiction. Their series of ten novels set in Stockholm in the 1960s arguably gave birth to Nordic Noir. What was the name of the main character and inspector in their books?
3) Wilkie Collins was one of the 19th century pioneers that helped shape crime fiction as it is today. Sergeant Cuff, the savvy detective in Collins' classic The Moonstone, had a soft spot for what?
4) Andrea Camilleri set his hilarious tales of corruption, power play and good food in his home region of Sicily. But what was the fictional name of the town that the Italian author used as his setting for the Inspector Montalbano novels? For a bonus point, what…
3 comments
Read more

May 10, 2018
An interview about crime fiction, my work and THE RED DIE, courtesy of crime author Sue Barnard: http://broad-thoughts-from-a-home.blogspot.cz/2018/05/the-red-die-interview-with-alex-macbeth.html

I wrote about Comandante Felisberto's fears in an excerpt from THE RED DIE, published on Australian crime author C.J. Sutton's blog.
http://box5253.temp.domains/~cjsutton/writing-fear-alex-macbeth/

An excerpt from THE RED DIE was featured on author JV Baptie's blog
https://jvbaptie.com/2018/04/14/the-red-die-alex-macbeth/

An excerpt from THE RED DIE was featured on author Isabella May's blog: https://isabellamayauthor.com/2018/04/13/meet-the-author-alex-macbeth/

I was interviewed by author crime writer Kate Braithwaite: https://kate-braithwaite.com/2018/04/10/introducing-alex-macbeth-and-the-red-die/

May 17, 2018
Last month I published the first 15 in a series of images from around the world that reminded me of classic crime fiction scenes. The images were of "grey, tempestuous skies; eerie cracks of light in a dark wood, a solitary street lamp in a deserted nocturnal landscape."

Each image is designed to inspire fear, apprehension, solitude, vastness, and often, an eerier, darker emotion.

The home of a Bond villain on the island in the distance? – Marsala, Italy.

Looking down or up? The vastness of a forest is a favoured location for crime fiction writers – South Bohemia, CZ.

Dartmoor, replete with all its legends of wild creatures on the Moors, has been immortalized in crime fiction by writers such as Conan Doyle.

Tunnel chases are another crime fiction favourite, with detectives forced to pull up their trouser hems and chase bad guys in a sort of rat-infested, subterranean homesick blues – Perugia, Italy.

Alex Macbeth_Author
Alex Macbeth is a writer of crime fiction, a journalist, a publisher of African literature and a festival founder in Mozambique. When he isn't writing, he usually finds other ways to be inconvenient.